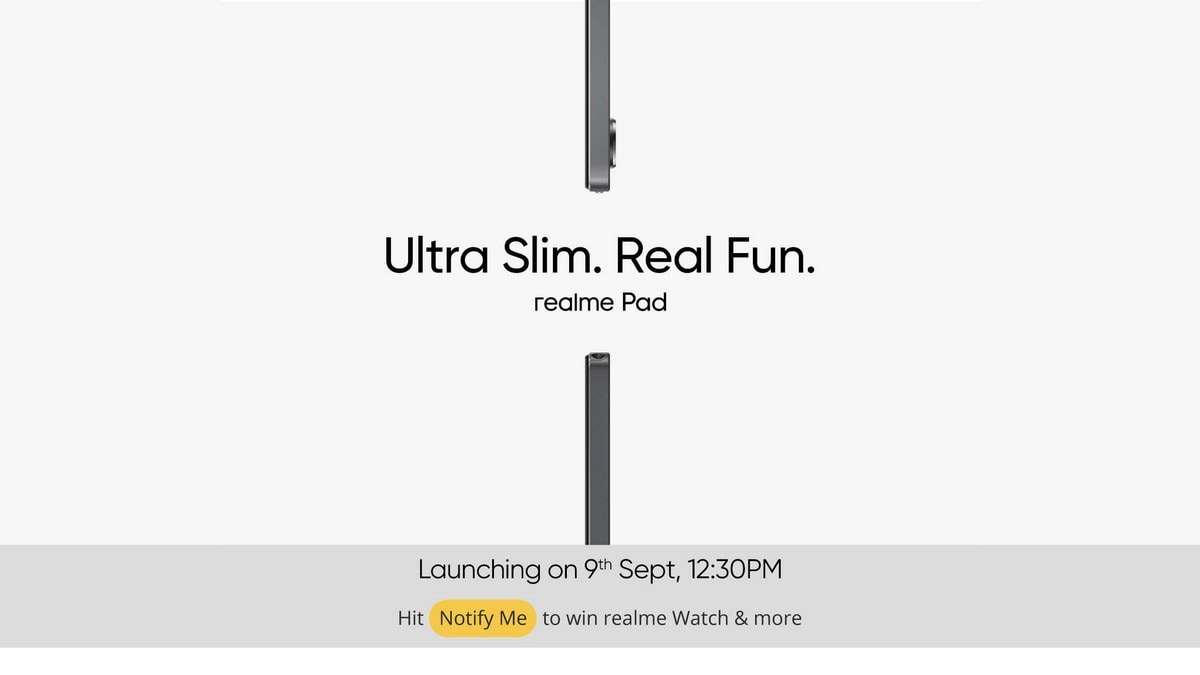 Realme Pad India launch date and time has been revealed by the company. The first tablet from Realme will be unveiled on September 9 at 12:30pm via a virtual event. From the official images, it seems to have aesthetics similar to the iPad Pro. Realme has also shared a couple of specifications for the Realme Pad and there have been a few leaks in the past that hint at more specifications and features. Realme, since its inception, has expanded into a wide range of products including smartphones, laptops, TVs, audio accessories, and more.

Realme has shared through a press release and its official India website that the Realme Pad will be unveiled on September 9 at 12:30pm. The company will hold a virtual event that will be livestreamed on its YouTube channel and Facebook page. It will also share more details on September 5. The Realme Pad is the first tablet from the company that has been in the business since 2018. Over the past three years, it has ventured into smartphones, laptops, TVs, audio accessories, power banks, and smart devices such as cameras, bulbs, weighing scale, among others.

The Realme Pad has been teased to have a thickness of only 6.9mm. It seems to have rounded corners with a 3.5mm headphone jack. Past leaks suggest that the Realme Pad may have an aluminium unibody construction and come in Gold and Grey colour options. It has been tipped to sport a 10.4-inch display, have a USB Type-C port, and a housing for a stylus.

It is also said to come with a single front and rear camera. The Realme Pad could sport an 8-megapixel sensor at the front as well as on the back, Both of which may have 1.36-inch sensors with an f/2.8 aperture, 2.8mm focal length, image stabilisation, and a 65.3 degree field-of-view (FoV). Both cameras are expected to capture images in 3,264×2,448 pixels resolution.

OnePlus V Fold, OnePlus V Flip Allegedly Spotted on Trademark Site, Tipping Imminent Launch
Budget 2023: TVs Made in India to Get Cheaper by Up to Rs. 3,000 After Tax Cuts on Imported Parts
Apple to Limit Wi-Fi 6E Connectivity to iPhone 15 Pro, iPhone 15 Pro Max Models: Report
Marvel Snap Is Rolling Out New PvP ‘Battle Mode’ That Lets Players Take on Their Friends
Tech layoffs have left workers living in the US on visas with little time to find a new job #shorts