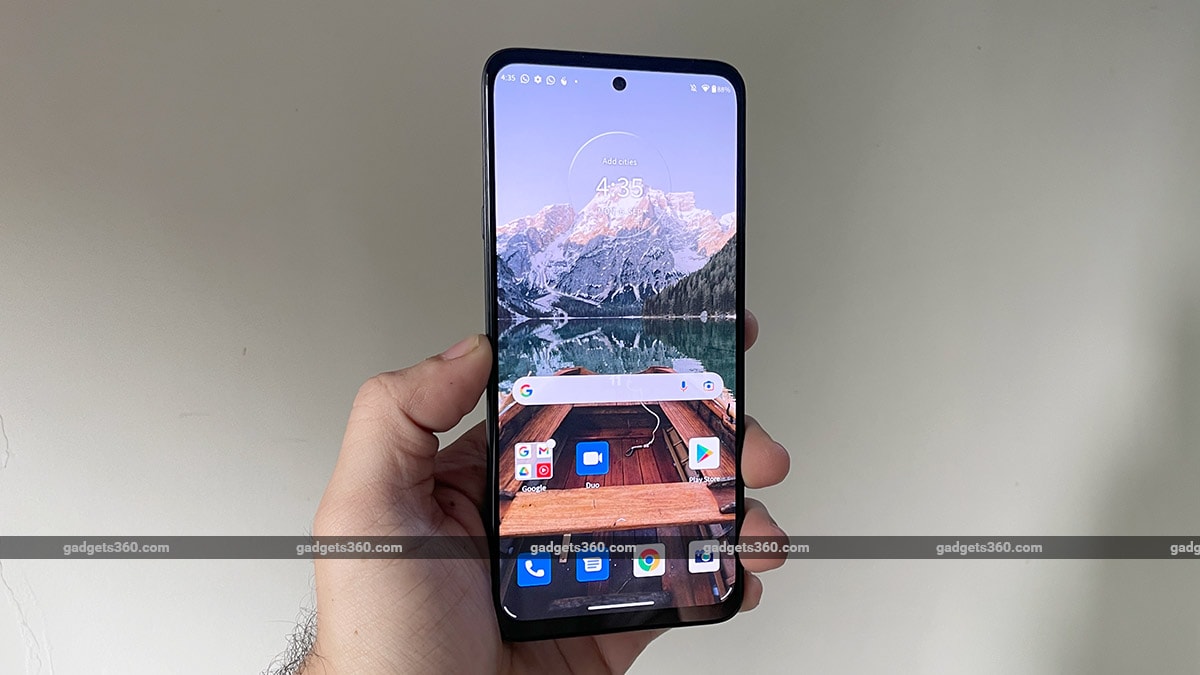 The Edge 20 Fusion has a side-mounted fingerprint scanner integrated into the power button. I found the placement of the scanner to be convenient enough to unlock the smartphone when holding it in either hand. The volume buttons are above the power button and need a stretch to reach. Motorola has placed a dedicated Google Assistant button on the left side, along with the SIM tray. The Edge 20 Fusion is IP52 rated and should handle splashes without any issues. At the bottom, you’ll find a 3.5mm headphone jack, USB Type-C port, primary microphone, and loudspeaker. There’s only a secondary microphone at the top.

The Edge 20 Fusion has a hole-punch selfie camera

Motorola has made the Edge 20 Fusion relatively slim at 8.25mm, and it weighs 185g. The back is made out of plastic and curves slightly along the sides, along with the frame. You get a triple camera module in the top-left corner, which protrudes significantly, causing the phone to rock about when placed on a flat surface. There are two more prominent lenses and one smaller one that sits above the flash. The rear panel of my Electric Graphite Motorola Edge 20 Fusion unit was a fingerprint magnet and needed constant wiping to keep smudges off. Motorola does offer a case in the box.

Motorola Edge 20 fusion sports a big 6.7-inch OLED display with full-HD+ resolution, 90Hz refresh rate, and support for HDR10. The display is protected by Corning Gorilla Glass 3. It has good viewing angles and you can tweak colour modes as well as the colour temperature. Powering the Motorola Edge 20 Fusion is the MediaTek Dimensity 800U processor, with either 6GB or 8GB of RAM. Storage remains unchanged at 128GB for both variants, and you can increase this by up to 1TB using a microSD card in the hybrid dual-SIM tray.

The Motorola Edge 20 Fusion has support for dual 5G as well as dual 4G VoLTE. It also supports Bluetooth 5, dual-band WiFi, NFC, and six satellite navigation systems. The Edge 20 Fusion packs in a 5,000mAh battery and comes with a 30W TurboPower charger in the box. Motorola’s supplied charger has a USB Type-C output, and you get a Type-C to Type-C cable in the box.

Motorola ships the Edge 20 Fusion with Android 11 and its lightly skinned MyUX interface on top. My unit was running the latest August Android security patch. Motorola has promised two Android version updates for the Edge 20 Fusion. The UI feels like stock Android but you can customise colours, fonts and icon shapes. Moto actions, which let you open some apps or perform tasks using gestures, are also available on the Moto Edge 20 Fusion. You won’t find preinstalled apps on this phone apart from Facebook and the usual Google apps, and you can uninstall the former easily.

Motorola’s Ready For feature comes pre-baked with the Motorola Edge 20 series. This allows you to connect your smartphone to an external display to use all your apps and games on a bigger screen. Ready For PC lets you connect your Edge 20 Fusion to a Windows PC via a companion app, and reminded me of Samsung’s Dex. This feature is limited to Windows only and you won’t be able to use this with a Mac. The Edge 20 Fusion did connect to my Windows laptop wirelessly after I had set up the companion app. All the apps on the smartphone could be accessed via the desktop, and I could also check incoming notifications and reply to messages. Alternatively, you can mirror the Edge 20 Fusion’s display.

The Motorola Edge 20 Fusion gave me no reason to complain during the review period. It was quick to load apps, and my 6GB RAM unit had no issues multitasking. Motorola has implemented a RAM boost feature which can use some of the phone storage as additional RAM. On my unit, it was using 1.5GB of storage to extend the RAM to 7.5GB. This feature was enabled by default but I could disable it.

Speaking of things enabled by default, the refresh rate on the Edge 20 Fusion is set to 90Hz, and that makes scrolling smooth. The side-mounted fingerprint scanner is quick to unlock the device, and face recognition didn’t take too long either. I particularly enjoyed watching videos on the crisp OLED panel but I did feel that this phone needs slightly better speakers.

The side-mounted fingerprint scanner is quite responsive

The Motorola Edge 20 Fusion managed to score 369,120 points in AnTuTu. In Geekbench 5’s single-core and multi-core tests respectively, the phone managed 585 and 1,741 points. The Edge 20 Fusion managed 69fps and 17fps in GFXBench’s T-Rex and Car Chase benchmarks respectively. These scores were slightly lower than those of the OnePlus Nord CE 5G (Review), which I reviewed earlier and which competes in the same segment.

I found the Edge 20 Fusion to be good for daily use and it managed to run about a day and a half on a single charge. In our HD video loop test, the phone managed to run for 15 hours and 26 minutes with the display refresh rate set at 90Hz. In similar conditions, the OnePlus Nord CE 5G managed a runtime of 19 hours, 59 minutes. Charging the Edge 20 Fusion using the included 30W TurboPower charger got it to 52 percent in 30 minutes and 88 percent in an hour.

The Motorola Edge 20 Fusion sports a triple camera setup consisting of a 108-megapixel primary camera, an 8-megapixel ultra-wide-angle camera, and a 2-megapixel depth sensor. The ultra-wide-angle camera has autofocus and is also capable of taking macro shots. For selfies, this phone has a 32-megapixel front camera. You won’t find the camera app overwhelming to use; it shows the Photo and Video modes by default while all the others are tucked away inside a menu.

The Edge 20 Fusion has a triple rear camera setup

Shooting modes are split between photo and video, which makes it easy to pick exactly the one you want. Motorola offers modes such as Spot Colour which lets you capture a black-and-white image with only one colour that you choose filtering through. Dual Capture lets you shoot photos or videos with the primary and the selfie cameras simultaneously.

The 64-megapixel primary camera captures pixel-binned 16-megapixel shots by default. Daylight photos taken with the Motorola edge 20 Fusion in overcast conditions were good. Objects at a distance had good detail and text was legible. However, darker areas lacked definition. The ultra-wide angle-camera offers a wider field of view with a slightly different colour tone compared to the primary sensor. These photos weren’t as detailed as those taken with the primary camera.

The Edge 20 Fusion managed close-up shots quite well. Objects were crisp with well defined edges and the phone did add a soft depth effect for the background. You can take 8-megapixel macro shots as well using the ultra-wide-angle camera, and these have good detail. Portrait shots had good edge detection and the subject was separated from the background quite well. It also let me set the level of blur before taking the shot.

Low-light photos had low noise but appeared to be smoothened. With Night Mode, the output was slightly brighter with better details in the shadows.

Selfies taken with the 32-megapixel front shooter are pixel-binned so you get 8-megapixel shots. These had good detail and looked natural, but weren’t consistent with colour reproduction.. While shooting in Portrait mode, the phone did let me set the level of background blur. Lowlight selfies also had good detail.

Video recording tops out at 4K for the primary camera and 1080p for the selfie shooter. Video stabilisation is available but it was disabled by default. The Motorola Edge 20 Fusion stabilised footage shot at 1080p well, but footage shot at 4K had occasional shakes. Low-light footage had a shimmer effect in the output when walking around.

The sub-Rs. 25,000 segment is quite popular among consumers who want better features and performance. This segment earlier consisted of older smartphones at discounted prices but things have changed now with recent models such as the OnePlus Nord CE 5G (Review), Samsung Galaxy F62 (Review), and Realme X7 5G (Review).

The Motorola Edge 20 Fusion is now a contender here too, and its Rs. 21,499 starting price makes it accessible to even those who are willing to stretch a little bit over an initial Rs 20,000 budget. This smartphone packs in powerful hardware plus a clean near-stock Android UI which will appeal to purists. Motorola has also managed to undercut the OnePlus Nord CE 5G by Rs. 2,000, making the Edge 20 Fusion an easy smartphone to recommend for this price.