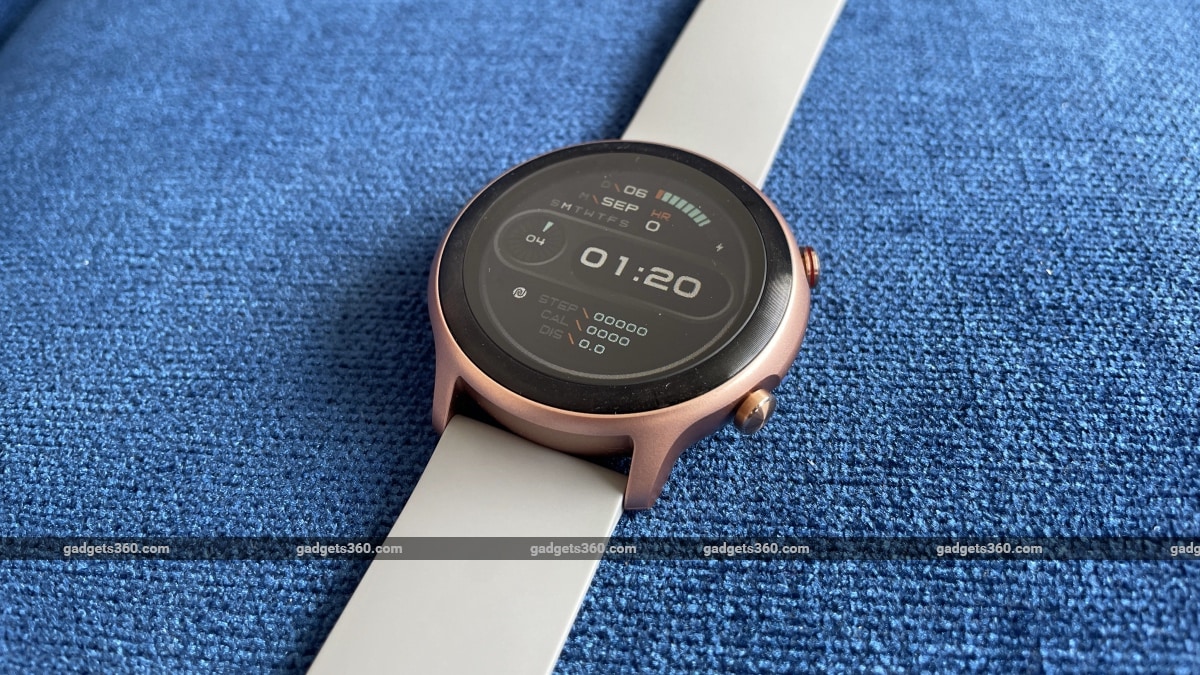 The product I’m reviewing here is a smartwatch in the traditional sense, but has fitness and health tracking features that could set it apart from the competition. The NoiseFit Active smartwatch is priced at Rs. 3,999 in India, and has useful features such as heart rate and blood oxygen tracking, exercise and sleep monitoring, and the ability to show notifications from your smartphone right on your wrist. Is this the best affordable smartwatch you can buy right now? Find out in this review.

The NoiseFit Active has 5ATM water resistance, so you don’t need to worry about most forms of water exposure

The NoiseFit Active has a round dial with a 1.28-inch TFT-LCD touch screen. The smooth matte finish of the dial and plain black border keep the focus on what’s on the screen itself. There are two buttons on the right side. The upper button is for power, to open the app menu, and go home, while the lower one opens and activates the workout modes. Other than this, navigation is entirely touch-based, with swipes and taps to move around and select specific options.

The bottom of the watch has the contact points for the charger and the optical sensor for heart rate and SpO2 measurements. The casing is made of plastic, which also keeps the NoiseFit Active light and comfortable, weighing just 45g. The smartwatch is 5ATM water resistant, and can therefore be worn safely in most water exposure situations.

While my rose gold review unit looked decent enough, the grey, black and blue colour options look a bit better in my opinion. You get a 22mm rubber watch strap included with the watch; it’s comfortable, completely waterproof, and can be replaced with any standard 22mm strap fairly easily.

The display has a resolution of 240×240 pixels, and can be woken with a wrist-lift gesture or by pressing one of the buttons; oddly, tapping the screen doesn’t work. The smartwatch uses Bluetooth 5 for connectivity, and supports smartphones running iOS 9 and above, or Android 4.4 and above.

The included charging cable latches onto the charging points on the NoiseFit Active magnetically, but doesn’t stay in place very securely; even the slightest movement can knock the charger out of place, and so I had to handle the watch carefully when it was charging. The other end plugs into a USB Type-A port, and can thus be used with most of your existing chargers, and even computers.

Like many of the budget smartwatches available today, the NoiseFit Active runs a custom operating system that is designed to work with its round screen and controls. It has a simple interface, and all apps and screens can be reached with a few button presses or swipes from the home screen. The UI includes a notification drawer, a quick settings shade, charts for fitness parameters, and an exercise tracking menu. The app drawer shows a few preinstalled apps for the various tracking functions on the NoiseFit Active.

There’s also a ‘Breathe’ app for guided breathing, and basic tools such as a stopwatch, timer, alarm clock, music remote, weather report, phone finder, and the Settings menu for the smartwatch. You can’t install any additional apps on the device, but the NoiseFit Active can read and display notifications from a number of apps on your smartphone, including WhatsApp, Gmail, Instagram, Twitter, and Facebook, to name a few.

There are two buttons on the NoiseFit Active, but most navigation and selection options rely on the touch screen

Although it took some getting used to, I was eventually able to navigate around the interface without too many missteps and quickly access what I needed. The default watch face was my favourite, since it displays a lot of relevant information apart from the time, such as the day and date, battery level, heart rate, steps taken, calories burned, and distance covered. You can choose from the 50 or so other watch faces available in the NoiseFit app, and also scroll through a handful them on the watch itself to find one you like.

The NoiseFit Active pairs with the NoiseFit app, available for Android and iOS. I used a OnePlus 7T Pro McLaren Edition for my review, and pairing the smartwatch with the app was an easy process that didn’t take too long. Once paired, I was able to adjust settings, change watch faces, view fitness and exercise tracking charts, and update the firmware of the smartwatch.

The app is very well designed. It regularly synchronises data and reliably pushes the right notifications to the smartwatch. Although you can see tracking charts on the watch itself, these are much better presented and easier to look at on the smartphone.

Most budget smartwatches tend to be focused on one particular feature, and the NoiseFit Active has fitness and health tracking at the fore. This is a capable smartwatch but it does not have the ability to work as a hands-free device for your smartphone the way the Fire-Boltt Talk can, and only shows notifications from supported apps, plus caller identification.

That said, the interface is designed to put health and fitness features within easy reach, making this smartwatch better suited to users with active lifestyles. As mentioned, I quite liked the default watch face, which provides a modern-looking, clear display of key data such as the heart rate, steps, battery level, and more.

The two key health parameters measured by the NoiseFit Active are your heart rate and SpO2 level, and the device provided accurate readings for both in normal use, when compared to a standard fingertip pulse oximeter and an Apple Watch Series 5. While working out, heart rate readings took a while to register and occasionally came up inaccurate at first, before eventually stabilising to accurate levels.

The NoiseFit Active uses Bluetooth 5 for connectivity, and has a 320mAh battery

When manually counting 1,000 steps, the NoiseFit Active registered around 1,040 steps, representing an error margin of around four percent. This isn’t too bad, but it’s a fair bit higher than on competition such as the Fire-Boltt Talk and Fire-Boltt Beast which both have lower error margins of around 2-3 percent.

Over longer distances, this error margin rose to around seven percent, when comparing its measurements to those taken by the Apple Watch Series 5. The NoiseFit Active registered around 7,600 steps while the Apple Watch Series 5 measured 7,100 steps, with both watches worn on my wrists simultaneously. This error margin is a bit high even for a budget smartwatch or fitness tracker.

Sleep tracking is decent enough, but the calorie and distance figures are essentially estimations based on steps counted. The stopwatch, alarm, and timer apps worked as expected. Exercise tracking includes specialised modes for walking, running, cycling, elliptical exercise, swimming, mixed workouts, and even yoga and cricket. I was able to test the walking, running, and elliptical modes, and the readings seemed to be slightly overestimated, as was the case with the pedometer.

Battery life on the NoiseFit Active is particularly good for a budget smartwatch, with the 320mAh battery on the device powering it for seven days with regular usage before it needed a recharge. It was always connected to the paired smartphone during this period. It took around three hours to fully charge the NoiseFit Active when plugged into the USB port of my laptop, and Noise recommends that you don’t use a fast charging adapter to prevent damage to the battery.

Heart rate and SpO2 monitoring are decent, but the pedometer does have a higher error margin for recording steps than competing products in this price segment. On the bright side, good design and comfort, decent software, stable connectivity, and very good battery life do make up for this to a large extent. The NoiseFit Active is a worthwhile option to consider for less than Rs. 5,000.

Are the Galaxy Z Fold 3 and Z Flip 3 still made for enthusiasts — or are they good enough for everyone? We discussed this on Orbital, the Gadgets 360 podcast. Orbital is available on Apple Podcasts, Google Podcasts, Spotify, Amazon Music and wherever you get your podcasts.
This article was originally published by Ndtv.com. Read the original article here.
Share on Facebook
Share on Twitter
Share on Pinterest
Share on LinkedIn