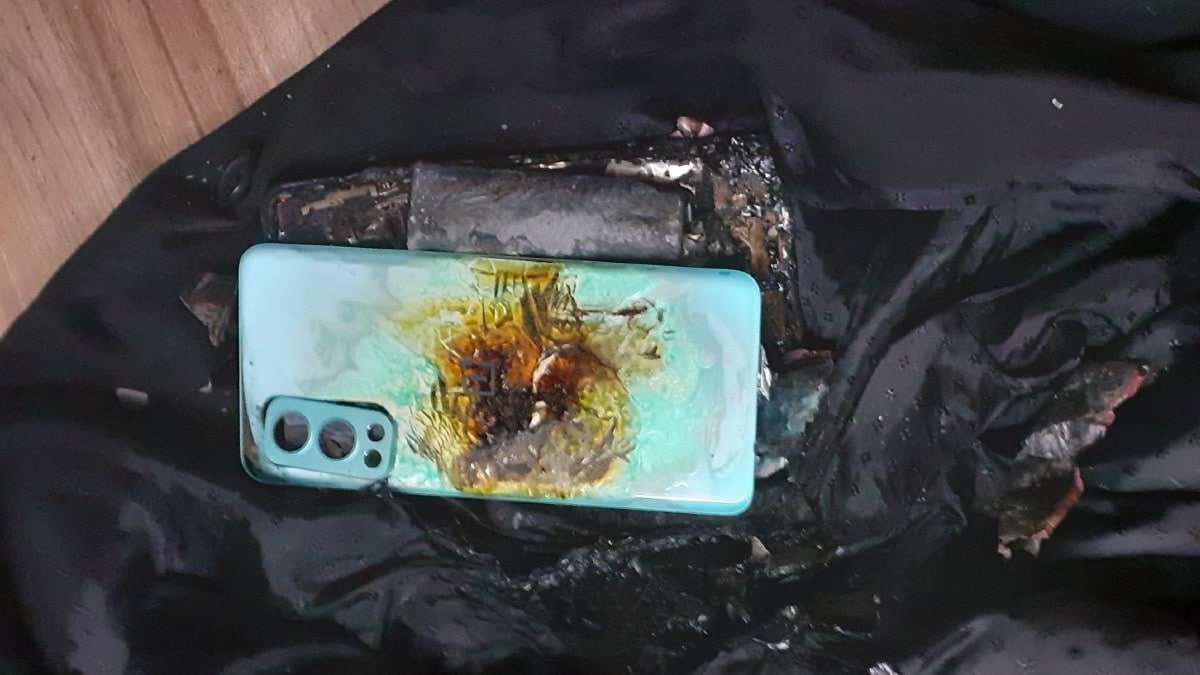 A OnePlus Nord 2 5G handset allegedly exploded in the gown of a Delhi-based advocate. The incident took place on Wednesday in one of the chambers of a court in New Delhi. The affected user shared details of the incident on Twitter and is in process to sue OnePlus. It is notably the second case where OnePlus Nord 2 5G has been alleged to have caught fire. The OnePlus phone was launched in July and the first instance of its explosion was reported online just last month.

Advocate Gaurav Gulati was sitting in his chamber on Wednesday morning when he started feeling heat coming from his gown’s pocket. He told Gadgets 360 that shortly after sensing heat on his lower body, he took out the OnePlus Nord 2 5G handset he had in his pocket and saw smoke coming out of it.

“I immediately threw the gown and once my colleagues and I went close to the phone, it exploded. The entire chamber was filled with smoke after that,” he said during a telephonic conversation.

The OnePlus Nord 2 5G unit in question was purchased on August 23, as per the screenshots posted by the affected user on Twitter. He told Gadgets 360 he had started using the phone just a couple of days before the blast happened.

“I didn’t even transfer the data from my old phone,” he said.

The user also mentioned that the OnePlus Nord 2 5G “was not in use or on charging” when the heat started to emerge.

“I am still in trauma and not able to come out of it,” he said.

Gulati told Gadgets 360 that he was in process of filing a first information report (FIR) against OnePlus Managing Director and Amazon executives for the explosion that resulted in burn injuries near his stomach. He said that he had immediately called the police after the event and went for a medical examination to proceed for an official complaint against the manufacturer and seller.

Gulati took to Twitter just hours after the explosion to inform the public. MySmartPrice initially reported about the incident.

In a statement to Gadgets 360, OnePlus said that the user refused to help “perform a proper diagnosis” after multiple attempts were made following the incident was reported on Twitter.

“A few days ago, an individual notified us about an alleged blast case for the OnePlus Nord 2 on Twitter, and our team immediately reached out to this individual to verify the legitimacy of the claim,” the company said in a prepared statement. “We take every claim such as this very seriously out of concern for user safety. However, despite multiple attempts to analyse the device, including a visit to the premises yesterday to examine it in the individual’s presence, he has so far denied us the opportunity to perform a proper diagnosis. Under such circumstances, it is impossible for us to verify the legitimacy of this claim or address this individual’s demands for compensation.”

Gulati told Gadgets 360 that he had refused to give the phone unit to the OnePlus team that visited his premises as he found it to be insensitive and believed that the team could temper the evidence of malfunctioning on the phone.

“Instead of being serious about the issue, the team that came to my place was telling me that the phone must have delivered a smooth experience,” he said.

Last month, a user in Bengaluru had reported a similar explosion issue with the OnePlus Nord 2. The company in that case had said that the results indicated that the damage to this device was caused by an isolated incident involving external factors and not due to any manufacturing or product issue.

OnePlus Nord 2 5G was launched in July with a starting price of Rs. 27,999. The phone carries a custom-designed MediaTek Dimensity 1200-AI SoC as well as a 4,500mAh dual-cell battery with support for Warp Charge 65.

WhatsApp Working to Keep Iranians Connected Amid Widespread Internet Shutdown Over Nationwide Protests
Mahindra Said to Be in Talks to Raise Up to $500 Million to Accelerate Plans to Build Electric Vehicles in India
Planning to Buy a Laptop This Diwali? How About These Powerful MSI Laptops Available With Discounts
Redmi Pad Pricing Revealed; Colour, Storage Options Tipped Ahead of Launch: Report
Iron Man Game Confirmed to Be in Development at EA’s Motive Studio