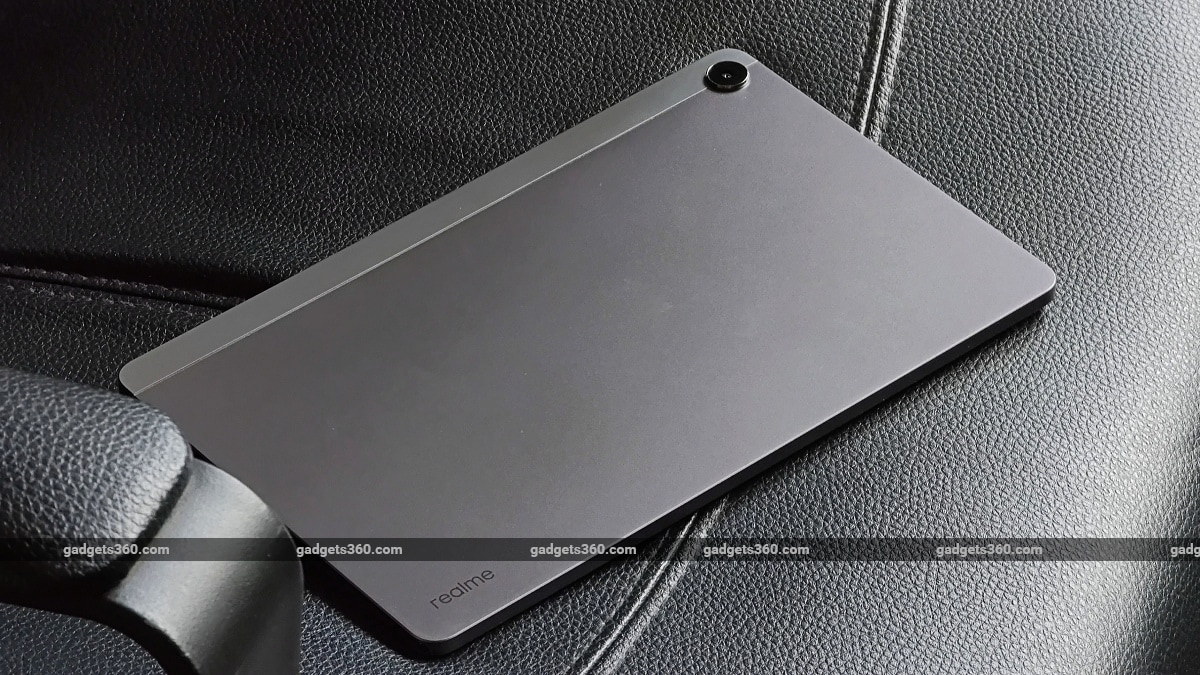 Buying an Android-powered tablet in India is quite difficult with most brands these days only offering models that are either underpowered or too expensive. Google hasn’t focussed much on tablets when it comes to developing Android, which makes things difficult for manufacturers who want to deliver a quality experience (with apps) at the right price. So, every Android tablet (budget or premium) largely has the same problems – poorly optimised UI and apps, and lots of wasted screen space. In comparison Apple’s iPads have the benefit of iPad OS and better support from third-party app developers.

So, what if a smartphone brand wanted to launch a tablet that offered more value for money than anything else available in the budget segment? Well, that’s Realme, with the new Realme Pad. After a week of use, I can conclude that despite the limitations of Android tablets in general, it is worth its price for those looking for a budget tablet primarily for media consumption.

The Realme Pad feels quite compact, even with its 10.4-inch display. In fact, I could hold the tablet like a smartphone (vertically) with my regular-sized hand. It’s also quite slim at 6.9mm, but does feel heavy at 440g.

The Realme Pad looks and feels quite premium and modern, with its rounded corners and flat sides. The LTE-enabled version I received for review had no visible antenna lines on the matte-finished metal back panel. This is because all the antennas have been placed under a colour-matched plastic cap, which sits above a fine silver strip at the back (when held horizontally). This strip runs horizontally across the back, through the rear camera.

The Realme Pad features two speakers on each side

As expected, most of the perforations and buttons sit on the edges of this plastic cap (which should also make them more accessible during repair). At the top left corner is the volume rocker, with the power button on the left. Towards the centre we have two mics followed by the SIM card tray.

The USB Type-C port sits on the right side, but the headphone jack is oddly placed on the bottom right corner. Most people would hold a tablet with their hand around this area, and the plug of a headset might get in the way.

The colour-matched plastic cap hides all the antennas

The selfie camera sits in the top centre above the display (when holding the tablet horizontally), and the bezels are quite thin. What I like about the display is its rounded corners, which help it blend in well with the overall design of the tablet. There are two speakers each on the left and right sides of the device. There is no fingerprint reader, so face recognition is the only way to quickly unlock the device. Thankfully, it worked reliably most of the time, with the tablet held horizontally or vertically.

While the matte-finished back panel is good at rejecting fingerprints, the display isn’t. Wiping the smudges off the Panda Glass front wasn’t easy either.

The box contains only the tablet, a charger, and a cable. Surprisingly, Realme has not launched a single accessory with the Realme Pad. There’s no word about any optional soft cases or a keyboard cover. Realme did confirm that the display does not support stylus input.

The Realme Pad uses the MediaTek Helio G80 SoC which was announced in February 2020. It’s a gaming-centric processor with eight CPU cores and a maximum clock speed of 2GHz. The tablet comes with up to 4GB of RAM and 64GB of storage, but also has room for storage expansion using a microSD card (up to 1TB). The higher-priced variants support 4G/LTE for both data and voice calls. Communications standards include dual-band Wi-Fi ac and Bluetooth 5. The Realme Pad has a 7,100mAh battery and supports 18W fast charging.

This is the first time that Realme UI has appeared on a tablet, so I was eager to try it out. It’s called Realme UI for Pad and it’s based on Android 11. Sadly, it appears to be a stripped-down version of the Realme UI implementation on the brand’s smartphones. It appears mostly stock (which isn’t a bad thing) but cuts down heavily on the customisation options offered on smartphones. The UI still retains the typical Realme icons throughout the interface, including the Settings app, but if you have used a recently launched Realme smartphone, you will find a lot missing. Long pressing on the homescreen does not let you select a wallpaper from the pop-up like with Realme UI 2.0 on its smartphones. Personalisation options are also very limited. There’s no way to customise the icon shape and size, nor can you change the colour or theme of the UI. There’s no right swipe to view the Google News Feed either.

The good bit about a stripped-down UI is that it feels lighter, and even with just 4GB of RAM, the software ran quite smoothly on my top-end review unit. However, multitasking was a bit of a problem. While apps usually opened and closed instantly, there were several instances when they crashed. Hopefully, these issues will be resolved with software updates, and Realme already promises one coming soon that will improve overall performance.

As with every Android tablet available today, there is a severe shortage of apps specially designed for tablets. This is not just a problem with third-party apps but even with those offered by Google. Most of them are designed only for smartphone displays and will stretch across the width of the display rather than scaling intelligently. While some apps still look fine, they don’t make good use of available screen space.

The Realme Pad has a 10.4-inch WUXGA+ LCD display with rounded corners

The 10.4-inch WUXGA+ (2000×1200) display looks sharp and gets quite bright outdoors. Colours looked quite natural, which is good. What I did not like was how quickly the Panda Glass picked up fingerprints, something that made it a bit hard to view the display outdoors. There’s no HDR support, but with a Widevine L1 certification, Netflix allows for full-HD playback. There’s also a four-speaker setup with support for Dolby Atmos. Audio gets loud enough to fill a small room, and Dolby Atmos helps make it immersive. During the entire review period I rarely found myself plugging in a pair of headphones. Indeed, it’s hard to find an equivalent offering in terms of audio in this price segment. For those who prefer a more personal viewing experience, there’s a 3.5mm headphone jack.

I placed a few cellular voice calls to test the two noise-cancelling microphones. The tablet does not cancel out noise completely, but it does a good job of suppressing background noise, and I sounded loud and clear to the caller. The caller had no problems with my voice quality even if the tablet was placed on a table at arm’s length.

With its MediaTek Helio G80 processor and 4GB of RAM, the Realme Pad offers decent performance given its price. In our benchmark tests, the tablet performed well, offering performance that’s on par with that of most budget smartphones. The Realme Pad managed a score of 2,24,755 in AnTuTu, as well as 345 and 1,305 in Geekbench’s single and multi-core tests respectively.

Gaming performance was not too great. Call of Duty: Mobile managed to keep it together, but with some stuttering and skipped frames. The device allowed Medium graphics and High frame rate, with the toggles for every other effect (Depth of field, Bloom, Ragdoll) greyed out. Asphalt 9: Legends also had a few hiccups with texture quality. The game worked the smoothest with the graphics set to Performance (Low).

There’s a single 8-megapixel camera on the back

The Realme Pad has 8-megapixel front and rear cameras. The camera interface is quite different from what we see on Realme smartphones, with a simpler layout and only very basic controls and settings. Still, Realme has attempted to offer some variety by including an expert mode with manual controls for ISO, shutter speed, white balance, autofocus, and exposure. Thanks to the rather basic sensor used here, the quality of images was strictly average. You can get much better photos with a budget smartphone. Videos were very shaky despite holding the tablet with both hands. Low-light shots were not usable. What I did like was the ultra-wide-angle 107-degree view of the front-facing camera. Its quality was decent, provided there was enough light.

The tablet has a 7,100mAh battery and comes with an 18W charger in the box. With regular use, which included an hour of gaming and several hours of video streaming, it managed to last a day and half, which is quite good. Charging speeds were average, with the tablet touching 22 percent in 30 minutes and 46 percent in an hour, and completing a full charge in 3 hours and 5 minutes.

The Realme Pad is a decent first attempt at a tablet, in terms of the hardware it offers. With no accessories (and no keyboard or stylus support), this is a tablet intended solely for media consumption and simple communication apps, not for any serious productivity. Starting from Rs. 13,999 in India, the Realme Pad offers decent performance along with a quality display and very impressive sound for its segment. Everyday performance is not a problem, and the ultra-wide selfie camera works fine for video calls. With an LTE-enabled variant starting at Rs. 15,999, there’s little to complain about. This gives the Realme Pad enough appeal provided you don’t intend to do any work on it.