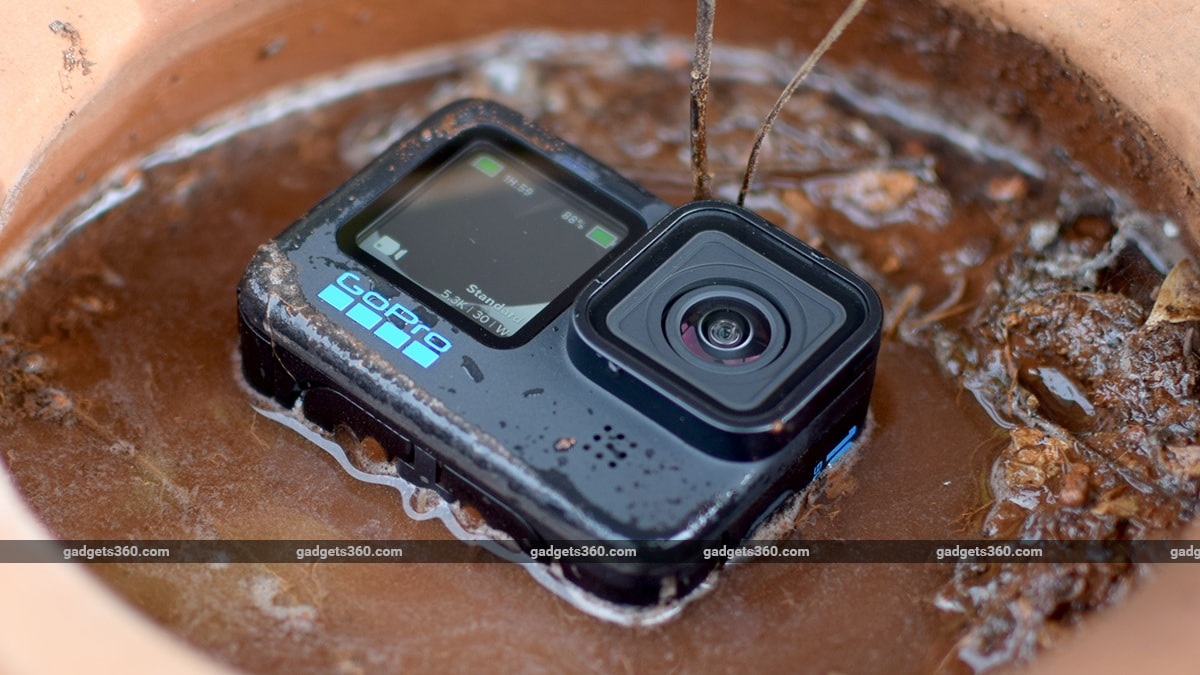 The GoPro Hero 10 Black is the successor to the Hero 9 Black, which launched exactly a year ago. Last year’s update introduced a major overhaul to the Hero series in terms of design as well as the sensor, displays, and performance, but in my opinion the user experience was still a bit sluggish and low-light video performance was lacking. The new Hero 10 Black promises to address these very pain points and more, thanks to a more powerful GP2 SoC. It’s time to put GoPro’s claims to the test and see just how much this new SoC improves the user experience, and whether this is a GoPro that existing users will find worth upgrading to.

In terms of looks, I wasn’t expecting any major changes since we got that last year. The GoPro Hero 10 Black is identical to the Hero 9 Black in terms of dimensions and design. The weight is a bit lower at 153g (vs 158g). The GoPro logo and the series name are now in blue, versus grey on the previous model, and some of the plastic panelling is now black instead of grey.

The layout of the buttons and ports is also very familiar. There are buttons on the top and the right side for the shutter and power/mode selection respectively. The battery is the same as the one used for the Hero 9 Black, so it is interchangeable. The battery compartment, USB Type-C port, and microSD card slot can be found under a water-sealed flap.

The GoPro Hero 10 Black has the same 2.27-inch touch display at the back and 1.4-inch display in the front as its predecessor. The resolution is the same for both, but the touch response for the rear panel and frame rate for the front one have improved. This action camera ships in a reusable case, and comes with some basic accessories such as a charging cable and adhesive mounts.

The GP2 SoC is the highlight of the new GoPro Hero 10 Black. This camera uses the same sensor as the previous model but because of the more powerful chip, the Hero 10 Black can now record video at up to 5.3K resolution at 60fps, versus 5K 30fps on the previous model. The frame rate has doubled for other resolutions too, so you can now shoot 4K 120fps and 2.7K 240fps videos. The Hero 10 Black can shoot 23-megapixel still photos, and you can now pull up to 19.6-megapixel frame grabs from a 5K video.

GoPro has developed a new HyperSmooth 4.0 stabilisation system, which works at more resolution and frame rate combinations than before. The in-camera Horizon Levelling feature has an increased tolerance from 27 degrees to 45 degrees. Other touches include a hydrophobic coating for the lens cover, better scratch resistance, and support for a wired connection to your phone for offloading content faster. The new image signal processor in the GP2 chip allows for noise reduction and local tone mapping in videos too, which means we should expect better detail and less noise in low-lit environments.

The GoPro Hero 10 Black’s interface is very similar to that of its predecessor, just more responsive. It supports all the features that were introduced with the Hero 9 Black such as Hindsight, Scheduled Capture, Duration Capture and LiveBurst. You can extend the camera’s functionality with the Quick app – this lets you edit your videos or live stream to YouTube, Facebook, Twitch, etc. The lens cover is removable, and the Hero 10 Black is compatible with all the mods that were introduced last year for the Hero 9 Black.

The UI speed improvement is noticeable the moment you power this camera on. When using it alongside the GoPro Hero 9 Black, the interface of the Hero 10 Black felt much smoother. Switching between shooting modes was quicker, and all interaction with the menus was more precise. There were a few instances when my input wasn’t registered, especially if the display was wet, but this is still a substantial improvement over last year’s model. The camera still gets quite warm when shooting continuously, but this never really impacted the output.

The speed boost offered by the GP2 SoC in the GoPro Hero 10 Black is also evident when shooting. Photos, especially HDR ones, are captured and saved much quicker than on the Hero 9 Black. When shooting during the day, I found photo and video quality to be very similar to that of the Hero 9 Black except for a slight difference in the colour tone, which was a bit cooler with the new model. The higher supported frame rates at 4K and 5.3K gives you more flexibility for slow-motion footage. Stabilisation was very good just like last year’s model and even when running, the footage looked smooth with very little to no jitter when shooting during the day. You can enable Boost for even more stable footage, but this comes at the cost of cropping the frame.

There is a noticeable improvement in low-light stills and videos, although it’s not as drastic as I would have liked. Photos shot using Night Photo mode had slightly sharper details compared to what the Hero 9 Black could manage, but I really needed to pixel-peep to notice it. HDR photos taken with the Hero 10 Black at around dusk had better dynamic range than those taken with the Hero 9 Black. Videos had less noise too, whether I was shooting indoors or outdoors in the evening. Objects in the shadows had better definition, and footage even looked a bit brighter. When shooting at night under dim lighting, the footage still tended to get noisy and details weren’t great, but this was still an improvement over the Hero 9 Black.

The GoPro Hero 10 Black can auto-upload all its content to the cloud over Wi-Fi when it’s charging, but there’s a catch. This feature requires a GoPro subscription (not to be confused with the Quik subscription) which is currently not available in India. It offers unlimited capacity for backups of your videos and photos at their full resolution, so you don’t have to keep transferring them to your phone or other devices. This costs $49.955 (approximately Rs. 3,712) annually in the US and includes other benefits such as discounts on accessories and a free replacement policy.

I had access to the service for this review, and it worked well. After the initial setup, which includes saving your Wi-Fi login details to the camera, the Hero 10 Black automatically wakes when plugged in to charge, and will upload any new footage to the cloud automatically.

The GoPro Hero 10 Black uses the same 1,720mAh battery as the Hero 9 Black, and in my experience, battery life was similar. On a full charge, with GPS enabled, you can expect about half a day’s worth of shooting or around an hour and half of video recording at 4K. Of course, your mileage will vary depending on various factors such as the resolution, frame rate, shooting mode, etc that you choose. If you’re planning to use the Hero 10 Black for an all-day shoot, it would be best to have at least one extra battery on hand.

In India, the GoPro Hero 10 Black costs Rs. 54,500, and it will be available in early November. The Hero 9 Black will continue to be sold at an officially reduced price of Rs. 43,000, although you can find it selling for less than that even now. The Hero 8 Black will also continue to be available for Rs. 31,000. If you haven’t already upgraded to the Hero 9 Black, it would be better to pay a bit more and get the Hero 10 Black instead, as you can’t really put a price on a more fluid user experience. However, if you don’t need the higher frame rates, the GoPro Hero 9 Black would still be a great choice.