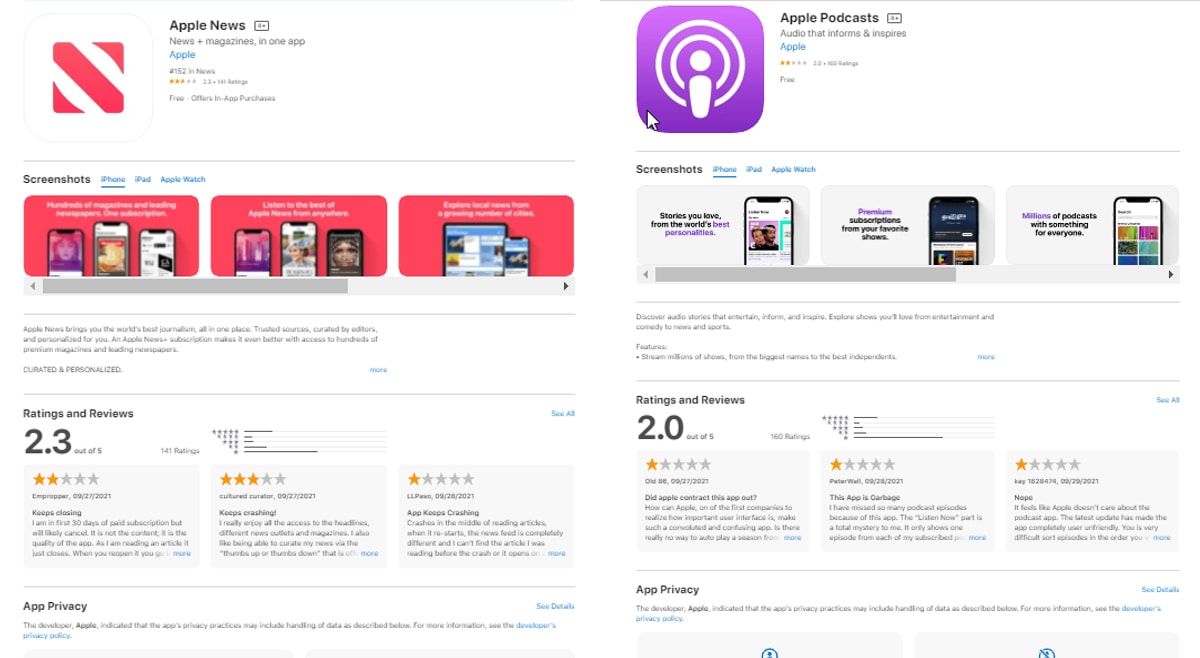 Apple has introduced the ability for users to rate built-in iOS apps in the App Store. This was not possible before and the change allows users to share their experience and provide feedback to Apple with the help of reviews. Apps like Files, Apple Maps, Apple Home, and Apple News — all now have options for user rating and reviews on the store. Most of these Apple apps have bad ratings on the App Store as of now, but it’s too soon to call and these ratings may not accurately reflect of how these apps actually fare.

9to5Mac reports that Apple lifted the restriction to rate and review Apple’s built-in apps for iPhone and iPads with the release of iOS 15. This means apps like Mail, Music, News, Stocks, and Calculator can also be rated and reviewed.

Surprisingly, Apple’s Podcast app currently fares the worst with just a 2.0 rating. Reviews at the time of writing this were largely complaints from users miffed with the redesign. Apple News gets a 2.3-star rating with complaints of frequent app crashing. The Translate app also just has 2.2 stars and users are comparing it with Google Translate in the reviews section.

The Voice Memos app, on the other hand, has a 4-star rating, and even the Weather app fares relatively well with 3.7 stars. Only Apple apps that can be deleted and reinstalled via the App Store can be rated and reviewed. For example, Phone and Messages are core apps and can’t be deleted, therefore, do not have App Store listings.

While Apple did not officially announce the rollout of this policy change, it is likely to have taken the step as third-party apps are forbidden from hiding their ratings. Even with the recent privacy labels, third-party apps have had to unwillingly share what data is used by the app for more transparency. Therefore, Apple may be looking to set a standard by giving the same treatment to its own apps.

As mentioned, most of these apps do not have a lot of reviews and ratings as the policy change is fairly new. Therefore, users should not rely on just these ratings and reviews while making a decision to install a built-in iOS app.