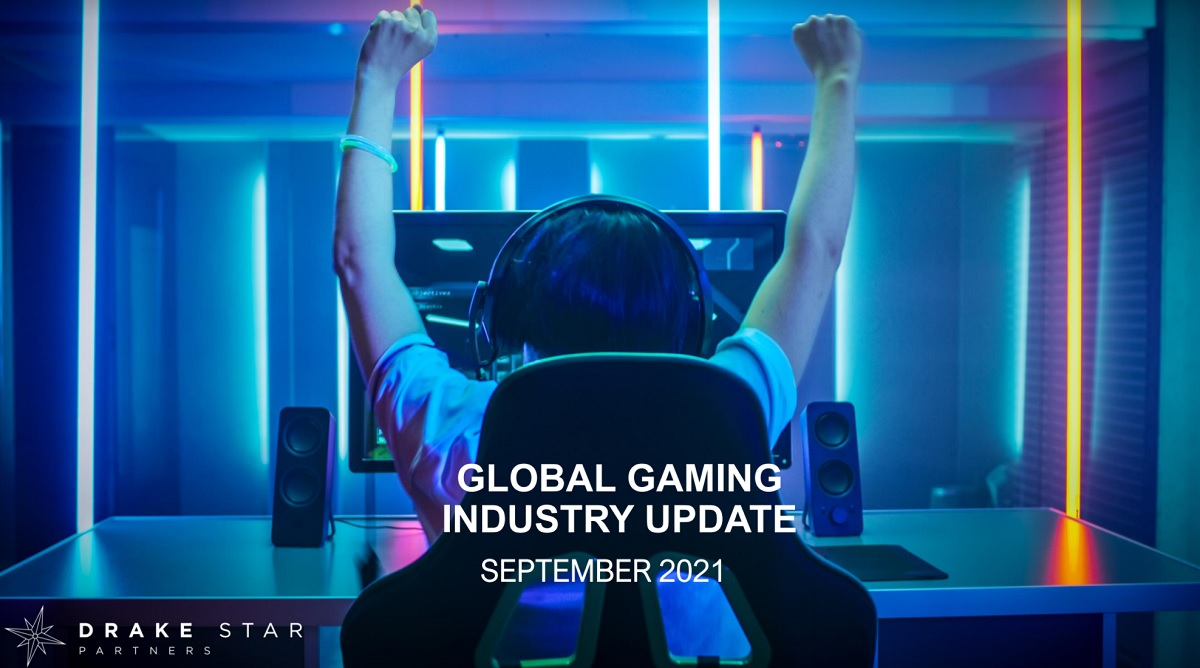 Game industries deals surpassed an unparalleled $71 billion in the first nine months of 2021, according to a report by investment bank Drake Star Partners.

With pandemic lockdowns shifting people from other activities into games and investors seeking havens, gaming has blossomed during a time when many other industries have been wrecked. And nine months into the year, the amount of money going into game acquisitions, investments, and public offerings is still growing at a record rate.

More than 844 deals were announced and closed in the first half with a total announced value of $71 billion, said Michael Metzger, a partner at Drake Star Partners, in an interview with GamesBeat. (We’ll be talking a lot about game deals at our GamesBeat Summit Next event on November 9-10).

“2021 is turning out to be a landmark year,” Metzger said. “We mainly focus on M&A and financings for private companies and Q3 has been an amazing quarter for both. We also expect that the M&A and private placement market for gaming companies to stay red-hot in the coming quarter.”

Special purpose acquisition companies (SPACs) were very popular earlier this year as a way to go public quickly through a reverse merger with a shell company, are losing some steam as well, as the regulatory environment for SPACs is changing and companies are also more cautious, Metzger said. As an example, JamCity had to cancel its announced SPAC deal and go another route for funding. 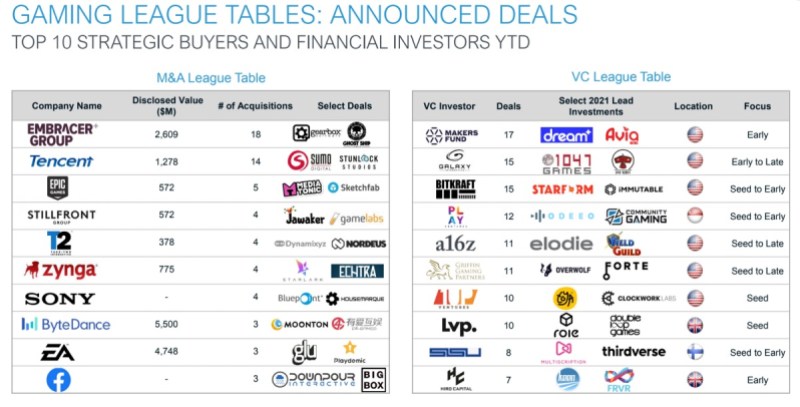 Above: The biggest game investors and acquirers of 2021.

The September update analyzes the first nine months of the year in terms of deal activity and volume across market segments (M&A, private placements, initial public offerings, and special purpose acquisition companies (SPACs, which are faster to complete than IPOs), and other public financings. It classifies M&A activity by volume and multiples, public market performance and valuations, and discusses the most active gaming buyers and VCs.

A total of 228 M&A deals were announced or closed during the first nine months of 2021 with a staggering $31.9 billion in deal value, Metzger said. 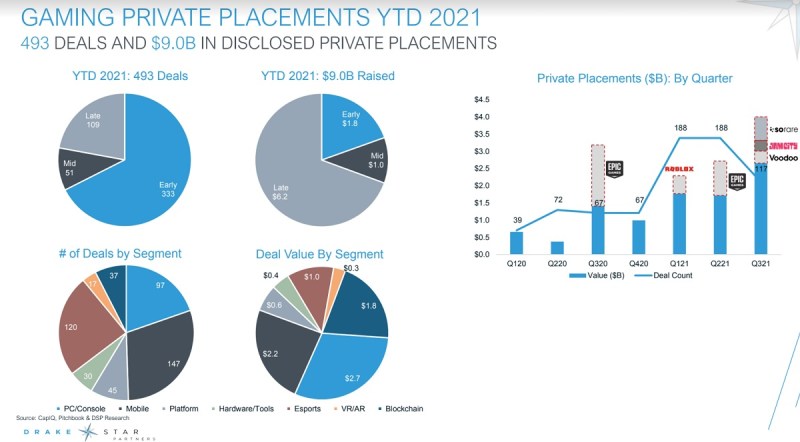 On top of that, a record $9 billion was raised by private companies in 493 deals from VCs and strategic investors. With two of the largest raises in gaming, the hot blockchain/NFT gaming segment attracted $1.8 billion in private financings.

And 2021 is also been a big year of high-profile IPOs, direct listings and SPACs: Roblox, Krafton, Unity, AppLovin, Playtika, Huuuge, Playstudios, Nexters, TinyBuild, Nazara, and Cherry Group have all gone public through these various kinds of transactions. 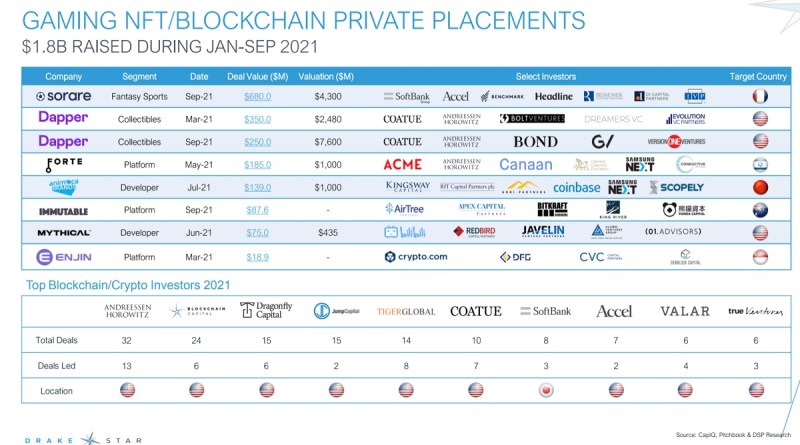 Above: Blockchain and NFT investments are going strong in games.

While the stock market has cooled off more recently, the third quarter saw further acceleration of private financings.

A total of $4 billion was raised over 117 deals with significant increase in average check size (JamCity, Voodoo, and Tilting Point). The NFT/blockchain gaming companies raised over $1 billion at some incredible valuations. Sorare, a fantasy soccer game company with just 30 employees, raised $680 million from SoftBank at a $4.3 billion valuation, thanks to Sorare’s $150 million in revenues this year.

And Dapper Labs raised a $250 million at a $7.6 billion on the strength of its $780 million in sales and resales for its NFT-based NBA Top Shot moments, and its deals with the NBA and the WNBA.

“We had a great, phenomenal quarter,” he said. “What was super exciting to me was the investments and private companies further grew significantly beyond the high since we’ve been tracking over the last two years. And at the same time, 13 out of the 15 largest financings were above $100 million, which is also phenomenal.”

It means that venture capital investors are confident that those companies will get acquired for much more money.

“The more money that flows into the private ecosystem, that’s super exciting for the future,” Metzger said. “The ton of M&A activity continued to be very strong, much larger from a dollar value than last quarter.”

Metzger noted how active Andreessen Horowitz, considered one of the top venture capital firms, has been in the space with a total of 32 investments in games this year. And the firm led 13 of those deals. 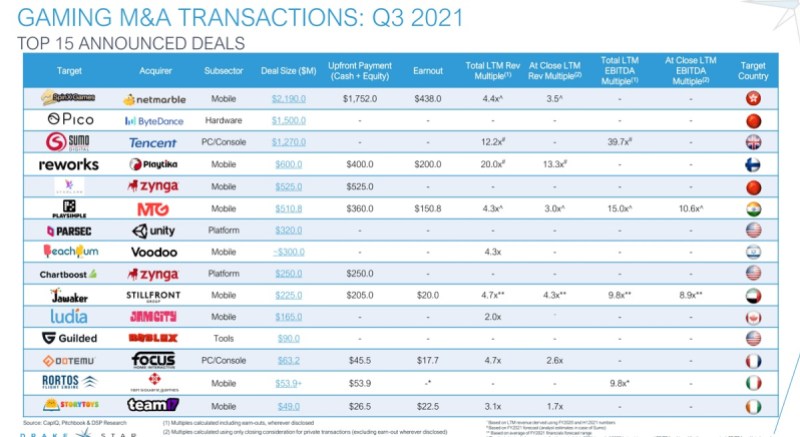 It may get harder to beat Q4 numbers, as last year Microsoft completed its $7.5 billion acquisition of ZeniMax, owner of Bethesda.

Krafton completed its IPO raising record $3.7 billion, Nexters completed its SPAC,  and Doubledown went public on Nasdaq through an IPO. Overall, public gaming companies faced headwinds and Q3 had limited new announced IPO and SPACs. The Krafton IPO was announced in the previous quarter and was completed this quarter.

Metzger isn’t sure how Q4 will turn out just yet.

“The headwinds in the public market are that we saw a lot of stocks decline,” he said. “And that’s reflected in the overall market, but also among other tech companies decline. A good amount of the gaming companies declined in value. And that might have been the reason why there have been no significant announcements of new IPOs that were announced this quarter.”