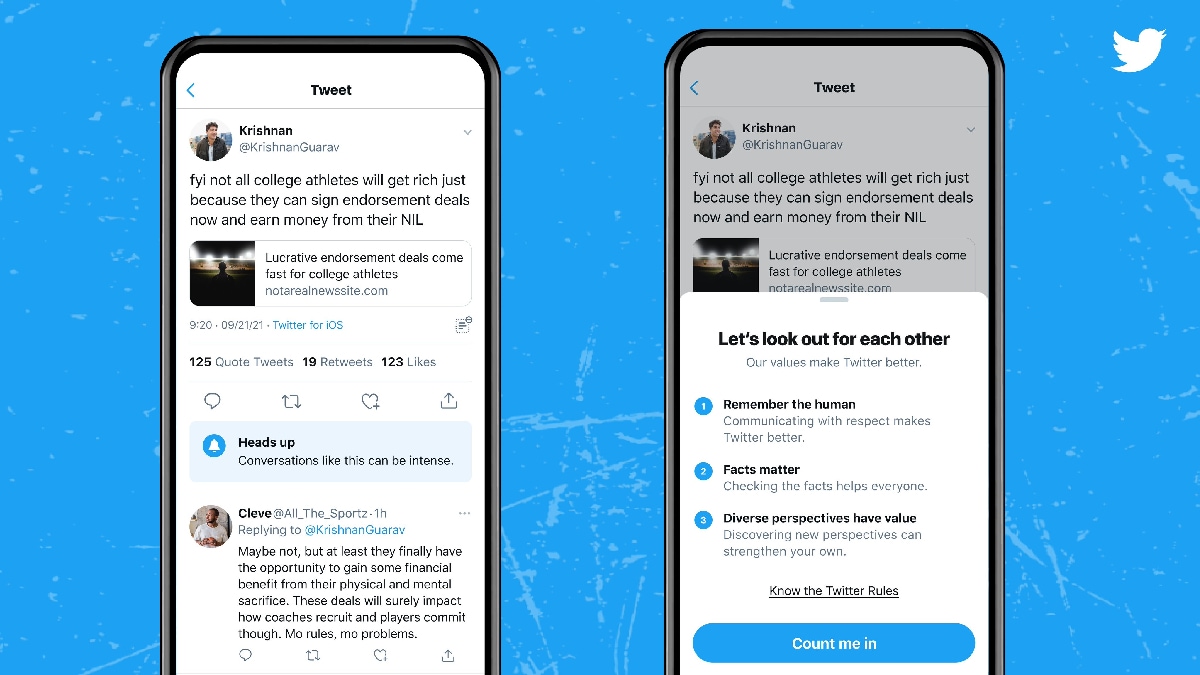 Twitter is testing a new feature that allows users to get the vibe of a conversation before they join in. The microblogging platform is testing new prompts on both Android and iOS apps, it announced today. The new ‘prompts’ feature will warn users before they get involved in a conversation that could get heated. It will appear below certain tweets on the platform and so that users note it before diving into the replies. The social media company has also provided example to show the new prompts that appear right in the middle of a conversation with the message, “Conversations like this can be intense.”

Twitter made the announcement via its official Support handle. “We’re testing prompts on Android and iOS that give you a heads up if the convo you’re about to enter could get heated or intense”, Twitter said. The company has provided screenshots with examples too. “Conversations like this can be intense,” shows one example, while the second one reads “Let’s look out for each other” with three bullet points stressing the importance of mutual respect and fact-based conversations, along with a quick link to Twitter’s rules.

Ever want to know the vibe of a conversation before you join in? We’re testing prompts on Android and iOS that give you a heads up if the convo you’re about to enter could get heated or intense.

This is a work in progress as we learn how to better support healthy conversation. pic.twitter.com/x6Nsn3HPu1

Twitter’s criteria to decide which conversations would display the prompt may change after the testing phase. Twitter also said that it may consider the tweet topic and the relationship between the Tweet author and replier in displaying the prompt. However, Twitter has not shared when the rollout of the new feature will take place.

The prompts are the company’s latest attempt to add more social privacy and reduce harassment on the platform. Aimed at this, Twitter last month announced that it will roll out a safety feature that would allow users on the platform to temporarily block accounts for a period of seven days for using harmful language or sending uninvited replies. Once the feature is turned on, Twitter’s systems will monitor the tweet content to assess the likelihood of a negative engagement and the relationship between the author and the replier. Accounts frequently interacted with will not be blocked automatically.

In another initiative, Twitter is eyeing to test new social privacy-related features to provide users control over their follower lists. The social privacy tools include details such as a person’s list of followers, the tweets they like, and whether their accounts are public or private.