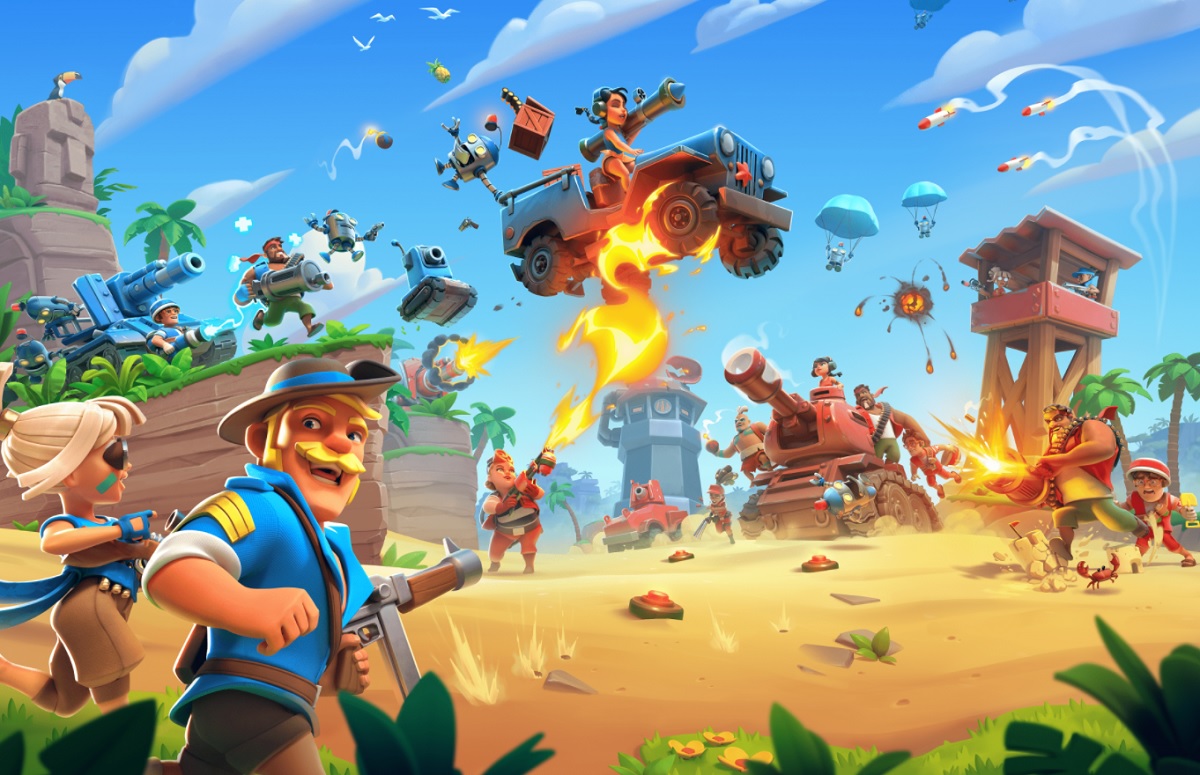 London-based Space Ape Games, which Supercell acquired via a majority purchase in 2017, has been working on the title for four years, Mansdorf said. Pre-registration is now open as the title nears its worldwide launch on iOS and Android.

“A lot of blood sweat and tears have gone into this game,” Mansdorf said. “It’s a mobile take on Battlefield. It means that it’s a game about big teams, epic battles, vehicles, defenses, power-ups, all sorts of chaos and wonderfulness all packaged up in a mobile friendly experience.”

Above: Boom Beach is a top-down multiplayer action title.

The game is played from a top-down view. The touchscreen controls are similar to a twin-stick controller shooter. You use your left thumb to control a soldier’s movement and the right thumb to point your weapon at enemies. When you get within range, you will automatically fire at an enemy and automatically reload. Your job is to keep your aim on the enemy, even as they target you.

“What we really focused on was trying to get a twin-stick shooter that could really be accessible for all people, but give you that sense of being part of a bigger battle on a large scale,” Mansdorf said.

The original Boom Beach came out as a strategy game in 2014 and it’s still being played today. Mansdorf said the team was working on a prototype before it was paired with the Boom Beach IP. When Space Ape Games started its prototype, it was always a WWII game, and it eventually made sense to partner with Supercell on the IP.

“Not only do we use characters from Boom Beach itself, but we’ve already developed our own characters and our own sort of movement forward in the intellectual property,” Mansdorf said.

The new game has similar cartoon-style characters and an accessible combat style, where there’s no death and blood. I played a little Boom Beach: Frontlines and it’s easy to learn in a minute or so.

“We were really inspired by the original game and the setting on this tropical island paradise,” he said. “It’s serious business but it’s also enjoyable and fund. There’s no death and destruction. It’s about going out and defeating the enemy and being part of a wonderful lush landscape as you do it.”

Players level up their HQ to unlock new troops and expand their loadouts that they can then take into battle. With a regular pipeline of updates, strong diversity of units, constant map rotations, and gameplay that rewards teamwork, Boom Beach: Frontlines brings a vibrant cooperative battlefield to mobile platforms. You can get tanks and drop bombs on enemies or blow up bunkers with the Zooka.

Space Ape’s own characters include a sniper as well as little robot grunts and some baby tanks.

You can level up your base and your characters to unlock and collect new units, defenses, vehicles, and power-ups.

While it is fast-moving, the game is latency tolerant, meaning the interaction time can be as long as a third of a second.

The game has different modes, like capturing a point and holding it against enemy attack. You can place weapons like machine guns to defend the point, and you can also create vehicles like armored cars to go on the offensive. Overall, there are 44 different character cards you can earn and play during the battle to give yourself an edge.

“There is a huge amount of content and diversity, which means that every match can play out differently, especially later in the game,” Mansdorf said.

The game monetizes through a monthly Boom Pass, which has both a free and a premium layer. In between battles, you can spend your rewards on upgrades and get access to better cards. The characters will be available to players who play the game, not just to those who make purchases in the game.

The title is one of two games that Space Ape Games is launching this year.