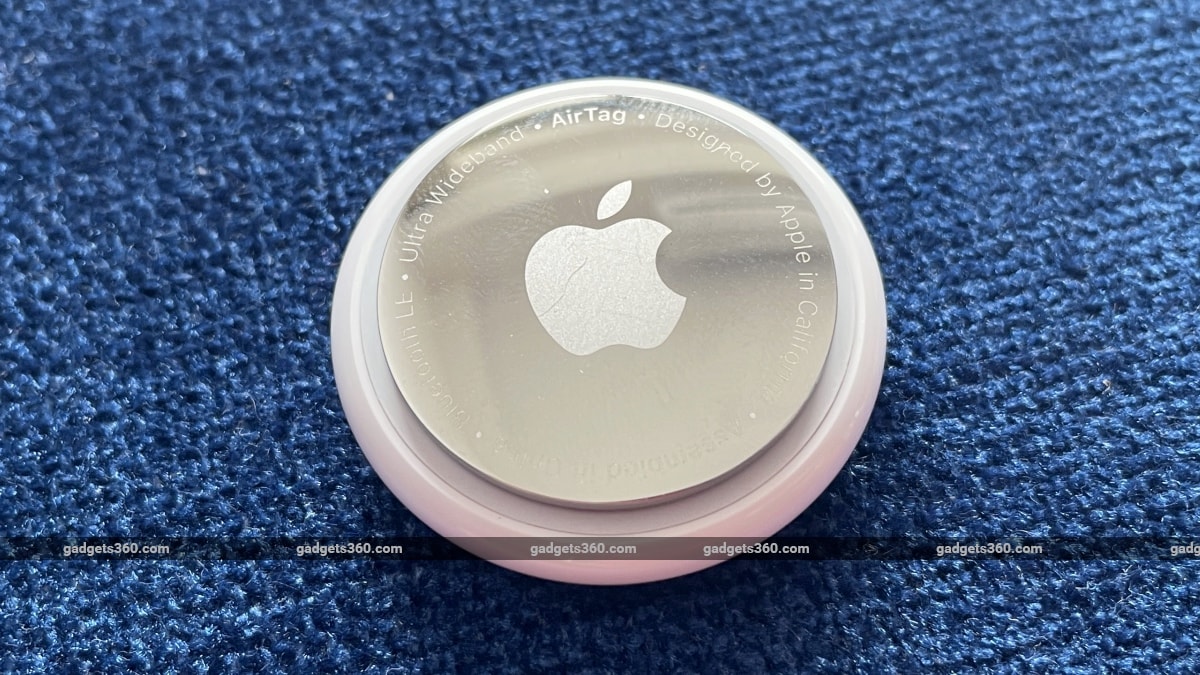 One of the smallest and most affordable devices from Apple, the AirTag is also interesting for a number of reasons. This tiny, disc-shaped tracking device is made to work within the Apple ecosystem, giving you an easy way to keep tabs on small objects such as keys, wallets, backpacks, handbags, and cameras. There are similar products, including the Tile range of trackers and Samsung’s Galaxy SmartTag, but the AirTag is smaller, looks better, and is designed to work well if you’re invested in Apple’s products and services.

Priced at Rs. 3,190 for one Apple AirTag, or Rs. 10,900 for a pack of four, this product serves a very specific purpose – helping you keep track of your belongings. Is it good at what it does? Find out in this review.

What is the Apple AirTag, and what does it do?

The Apple AirTag is a tracking device that can be attached to a small personal object such as a bunch of keys, or placed inside a backpack, handbag, or suitcase. The device uses Bluetooth for connectivity, and draws power from a replaceable CR2032 button cell. The small, disc-shaped tracker can be linked to your Apple ID using an iOS device, and controlled using Apple’s Find My app.

Each AirTag can potentially be tracked using Apple’s crowdsourced ‘Find My’ network. An AirTag can ping any nearby supported iPhone, regardless of whose it is, which can then anonymously share its location with the user of the account it’s linked to.

Connecting and linking your AirTag to your Apple ID is easy; just bring it close to your iPhone to get started

Of course, this method isn’t perfect, and indeed AirTags work best when used within a small and known radius. They’re meant to efficiently help you find something you’ve misplaced in your home or office, rather than lost on the street.

Each AirTag runs on a replaceable battery that is said to power the device for up to a year before needing a replacement. For connectivity, they use Bluetooth Low Energy. AirTags are compatible with any iPhone, iPod touch or iPad running iOS 14.5 or later. There’s also a Precision Finding feature that leverages Ultra Wideband through the U1 chip on compatible iPhones (all iPhone 11, iPhone 12 and iPhone 13 models). Each AirTag has a built-in ringer that emits a sound to help you locate it in close range. The device is IP67 rated for dust and water resistance.

It’s worth pointing out that the AirTag is very prone to scuffs on the metal outer side, and just a few days into its use I already had a few scratches. These didn’t bother me too much since they didn’t affect the functioning of the device; this is meant to be something you set up and forget about, until the unfortunate point that you may need to activate its tracking features.

Apple sent me a pack of four AirTags for review, along with a Rs. 3,590 Leather Key Ring and a Rs. 2,990 Loop. Each AirTag can be set up separately, and the accessories, although expensive, will help in attaching them to objects you want to use, such as keys or a bag. It’s worth pointing out that you can buy more affordable third-party accessories for the AirTags, with plenty of options available on e-commerce stores.

The Apple Leather Key Ring for AirTag is priced at Rs. 3,590 in India

How do I use the Apple AirTag?

Apple tends to make the setup process simple with its products, and Apple AirTags are incredibly easy to set up. It took me less than a minute to get one ready for use; it was detected by my iPhone immediately on activating it, and took just a handful of steps to register it to my Apple ID with an editable electronic label. There are a few selectable options for labelling each AirTag, such as Keys, Backpack, and Bike, to name a few, but you can also choose a custom label for your AirTag and change it at any time.

Once done, I was able to keep track of the AirTag – and the personal item it was attached to – with the Find My app on iOS. The app allows you to track devices such as an iPhone, Apple Watch, iPad, and Apple audio products, and those of other people such as family members (when location sharing access has been granted to you). For AirTags, the ‘Items’ section is the important one, since this shows the location of your ‘AirTagged’ personal items, and also lets you access the controls and functions for specific items.

The first thing you’ll see is a map view (powered by Apple Maps), which shows the last known location of your tagged items. Pulling up the items list shows you specifics about those items – in my case, all three showed a ‘With You’ sign, indicating that they were in the immediate vicinity of my iPhone.

Tapping on a specific item lets you see the battery status of that particular AirTag, play a sound to help you quickly find it in your immediate surroundings, find it directionally using its Ultra Wideband signal with on-screen prompts and vibration feedback, and choose notification settings for it. You can choose to be notified if that item has been left behind, select location exceptions for notifications, rename or remove an item, and enable ‘Lost Mode’.

The notifications when an item was left behind worked well, letting me know if I was no longer near an item with an AirTag attached. Furthermore, placing an AirTag in my scooter also worked, as it provided me the last known location which was even updated occasionally – presumably when someone with an iPhone was nearby.

When ‘Lost Mode’ is active, the Find My app will use its network and anonymous location sharing from other users to attempt to locate the AirTag and tell you where it is. I didn’t activate this mode since I didn’t lose my items at any point during my review, and it’s worth mentioning that this isn’t a foolproof way to find things you’ve lost.

The system relies on the AirTag being able to ping a nearby iOS device using Bluetooth, which may not always be possible. However, if it does work, it will notify you that the device has been found and provide you a location.

In countries such as the US where a lot of people use iPhones, the ‘mesh’ of users contributing to the Find My network is huge, making such a device much more effective even in somewhat remote locations. It’s also worth pointing out here that you can opt out of the Find My network entirely, and users who have done so will not be contributing to the network and its ability to help detect lost AirTags.

In India, it’s a little less reliable for this functionality, since this depends on your lost AirTag being in close proximity of someone with a supported iPhone who has not opted out of the Find My network; the number of iPhone users is already small, even before you have to exclude a few of those who have opted out. Naturally, this would also mean it’s much more effective in urban areas, where there will likely be more iPhones to work with.

Within my home, the AirTag worked well, producing a chiming sound as needed, which helped me identify where it was. However, the sound wasn’t very loud, and I often needed to silence everything else to be able to hear it. The on-screen Precision Finding feature also worked well, showing me the distance to the AirTag, with an arrow and circle showing me the direction to move in. There’s even vibration feedback that got stronger as I got closer.

It might also be important to bring up potential privacy and safety concerns here. This is a small, easy-to-hide device, and could potentially be used to track another person through a personal item or vehicle without them knowing. Apple has built features into the product to counter these exact concerns, but researchers and tech reporters suggest that these don’t work as well as they should.

The Apple AirTag scuffs easily, with scratches showing on my review units within days of opening them up

The Apple AirTag is as niche a product as it gets, but it’s one that fits very well into the Apple ecosystem and does its job reasonably well. It’s very good at finding items misplaced in a known space, and could potentially work for items that are lost or stolen as well, although the latter system is not guaranteed to work, especially in India where Apple devices remain out of reach for many people. Although you will have to periodically replace the batteries, the AirTag uses widely available CR2032 cells and will be easy to maintain in the long run.

While Apple claims the battery will need to be replaced only once a year, this entirely depends on how it’s used – features such as the ringer and Ultra Wideband detection will speed up battery drain.

Although very susceptible to scuffs, the Apple AirTag gave me very little else to complain about – apart from its price, and the cost of Apple’s original accessories. It’s expensive for the kind of features on offer, and will only really make sense if you’re heavily invested in the Apple product ecosystem and often misplace your personal items around your home or office.