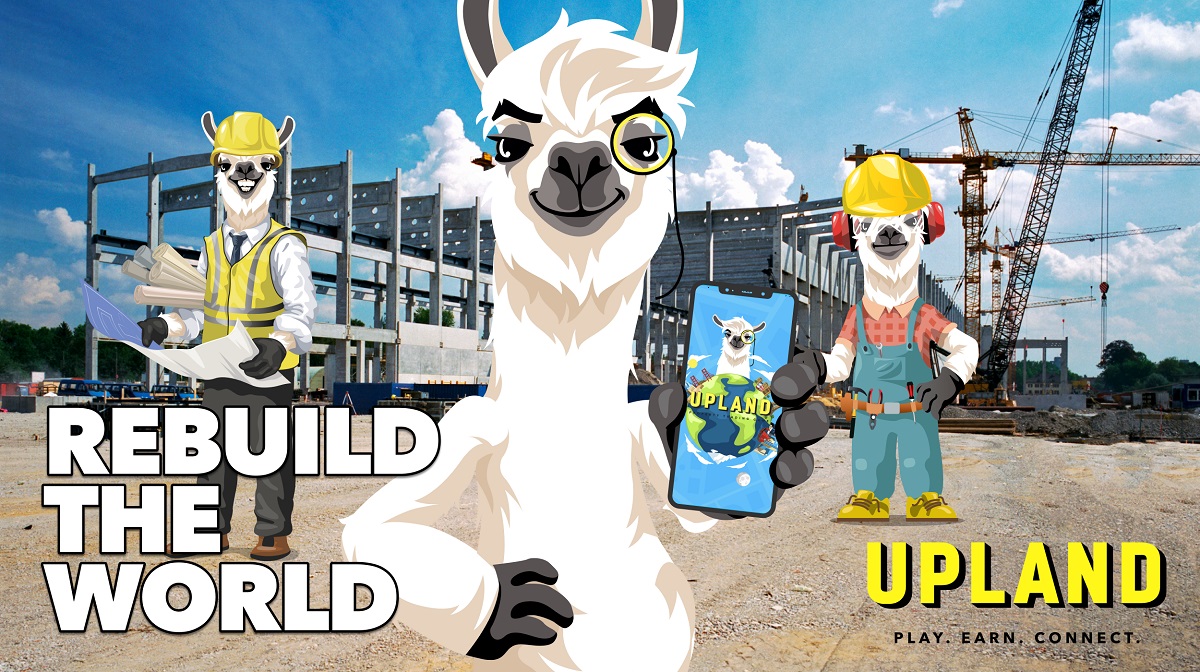 Upland has raised $18 million at a $300 million valuation for its nonfungible token (NFT) virtual real estate game, which is kind of like a real world version of Monopoly.

Palo Alto, California-based Upland (whose official name is Uplandme.Inc.) describes itself as having one of the fastest-growing metaverses on the blockchain that is mapped to the real world. It overlays virtual digital ownership on the real world, so you could own your house in the physical world or own it in the virtual world. Better yet, you could own San Francisco City Hall in the virtual world.

NFTs use the transparency and security of the digital ledger of blockchain to authenticate digital items, and in this case, the NFTs authenticate ownership of a property, like the digital version of the Empire State Building. And the company has a $300 million valuation even though it is only available in 13 cities in the U.S. so far.

NFTs have exploded in popularity this year, and that explains the strong valuation for Upland, which has a relatively small 60,000 daily active users. Animoca Brands, which recently raised $138 million in funding, led the investment. Previous investor C3 Management (formerly known as FinLab EOS VC) also contributed to the round.

Idan Zuckerman, cofounder of Upland, said in an interview with that the company is profitable and it will use the money to hire people and invest in user acquisition.

“This is basically a way for us to be speed up the way we deliver new features and innovations for our roadmap,” said Zuckerman. “We also had our first major brand partnership in Upland now, and we will be able to bring more corporations into Upland.”

Ever since the spring, I’ve been writing regularly about NFTs. If you look at Google Trends, you’ll see that NFTs started picking up in February and skyrocketed after related NFT sales like digital art and NBA Top Shot took off. Dapper Labs has now seen sales and resales of those NFTs top $780 million. In March, an NFT digital collage by the artist Beeple sold at Christie’s for $69.3 million. It sounds so dumb. The popularity of NFTs have exposed some serious drawbacks too in numerous scams where people steal art and sell it as their own NFTs.

By May, the NFT market had crashed on Ethereum. Kotaku wrote that the NFT bubble had burst. But then it rose again in August and September, took a dip, but grew steadily. It’s been as volatile as cryptocurrency trading for Bitcoin, but it has steadily gone up. DappRadar, measuring the broader NFT market beyond just Ethereum, reported that NFT sales hit $1.2 billion in the first quarter, $1.3 billion in the second quarter, and a whopping $10.7 billion in the third quarter as games such as Axie Infinity took off.

Fans also believe NFTs will usher in the metaverse, the universe of virtual worlds that are all interconnected, like in novels such as Snow Crash and Ready Player One. Since NFTs can authenticate digital ownership, you could take the assets and avatars you buy in one world and take them to another. 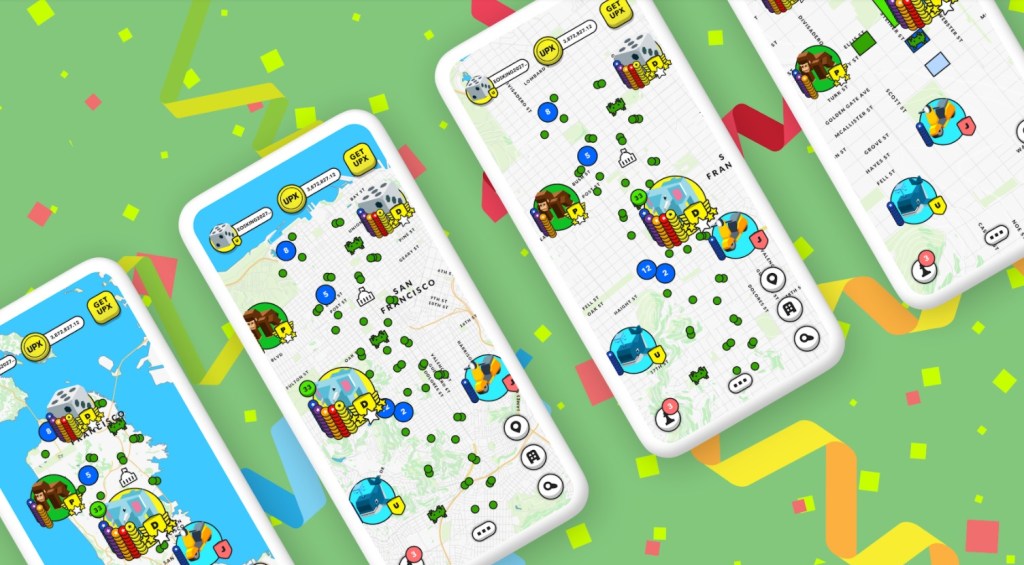 Above: Upland is a virtual property game supported by blockchain.

But let’s get back to Upland. I’ve been writing about them since 2019, when they unveiled their game. The company was founded as Uplandme in 2018 by serial entrepreneurs Dirk Lueth, Mani Honigstein, and Idan Zuckerman. They raised $1.8 million. The title debuted in beta form in 2020. The company has been profitable for a while

The company used blockchain early on, but it chose to hide that complexity from the players. It had to implement anti-fraud and anti-money-laundering rules.

So far, it has 13 U.S. cities available, and over 100,000 virtual landowners from all around the world participate in Upland. Over two million NFTs have been purchased by players, and places like San Francisco and Manhattan have been sold out of virtual land since the beginning of this year. Each day, more than 60,000 daily active users buy, sell and trade virtual properties, build houses, complete property collections, and participate in treasure hunts and city tours.

Upland aims to enable players to own their own properties in the virtual world, unlike many traditional games. It embraces the “play-to-earn,” where players can sell their holdings and make real money on them.

Players transact using the native game currency, UPX, to mint a variety of NFTs which are fully tradable on the open marketplace for both U.S. dollars and the virtual currency UPX. While players can use real dollars to purchase and sell NFTs in the secondary market, UPX is the only currency used to mint most NFTs in Upland, which adds utility to the token. The virtual currency is not tradeable outside of Upland, which helps it stay out of regulatory trouble. Legally, that makes UPX a digital good, rather than a currency.

“Since the objects are just a virtual currency or utility token inside of our game, that allows us to basically offer safe exchange of goods into U.S. dollars and vice versa,” Zuckerman said.

Thanks to our partnership with Linden Lab’s Tilia (used in Second Life), verified Uplanders can sell their digital assets directly for U.S. dollars. This makes Upland one of the few games in the world where players have actually earned real-world money. To date, players have earned more than $1.5 million playing Upland.

Above: Upland has a location-based game where you can buy virtual properties.

Thanks to the popularity of NFTs, Upland’s valuation and funding are much bigger in this round.

“We are impressed with what the team has built so far. Upland has innovated in many ways, including its mobile-first approach offering users iOS and Android apps,” said Yat Siu (also speaking at our summit), the executive chairman of Animoca Brands, in a statement. “Its ‘NFT to fiat’ offering allows metaverse citizens to sell their digital assets to other players for US dollars. Most importantly, Upland’s NFT Portal enables NFT portability from different blockchains, making possible the interoperability that is a crucial pillar of the open metaverse.”

Upland recently launched Upland Legits, which is a new suite of NFT offerings designed to enable brands, personalities, and organizations, such as sports clubs, athletes, artists, entertainment brands, to extend their real-life presence into the Upland metaverse and beyond.

OneTeam Partners, one of the investors, facilitated a deal with the NFL Players Association (NFLPA), which was the first brand to utilize Legits in Upland, bringing over 2,000 football players into the metaverse. The NFLPA also became an indirect shareholder in Upland via OneTeam Partners.

“Our platform continues to see amazing growth, an enthusiastic community and a thriving economy, and this is just the beginning. We know that we bring a unique proposition to the dynamic field of NFTs. What sets us apart is Upland’s connection to the real world in combination with engaging game mechanics driving an almost endless number of compelling use cases for NFTs,” said Dirk Lueth, co-founder of Upland. “We are proud that Animoca Brands, a clear thought leader in gaming and blockchain, led this funding round. This will be a strong partnership that will help us to expand into new territories and start the next chapter in Upland’s history.”

Zuckerman said his company is growing responsibly by launching city by city. It would have been easy to launch nationwide, but that would have made for a stressful game with high volatility of prices. It actually caps the prices of landmarks in the game like Rockefeller Center, since the bidding wars would drive these properties far out of the affordability range of most players, Zuckerman said. 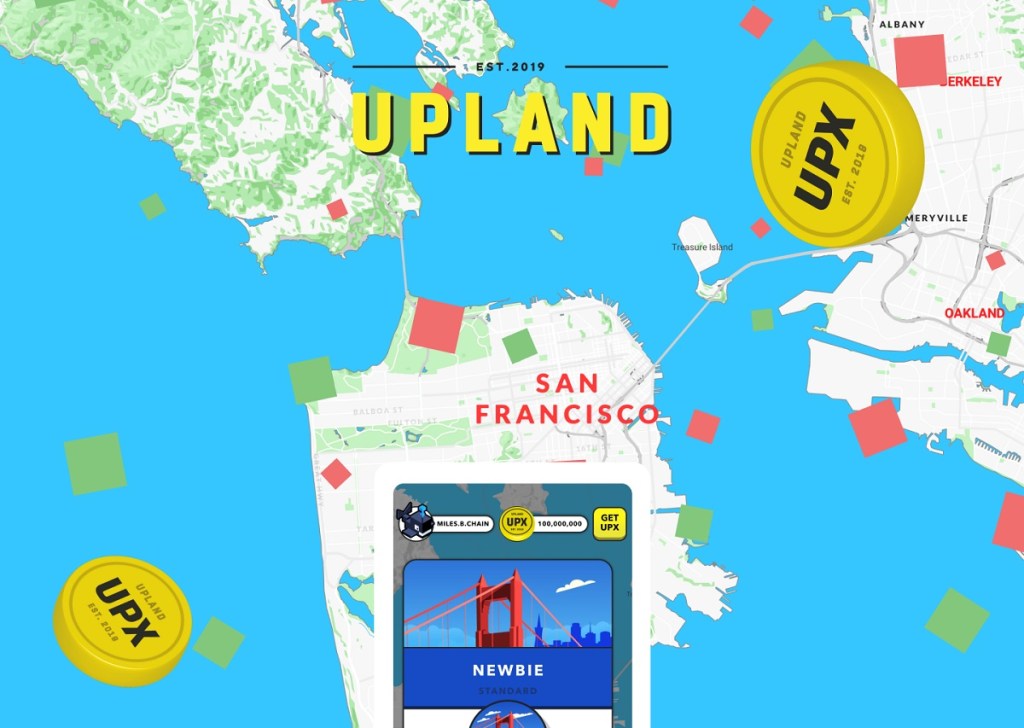 Above: Uplandme has a blockchain property game.

“We are doing a responsible job of maintaining a viable economy, and growing steadily and slowly,” he said. “If we had released the entire U.S., that would have been disastrous for the economy.”

The company would rather see mass adoption happen, and that won’t happen if you have to buy properties in the game for a billion dollars. Still, some of the landmarks in the virtual world are selling for something like $25,000. (They could have sold for a lot more). There are some players who have turned into moguls, Zuckerman said.

Upland’s motto is to “Rebuild the World” and it takes sustainability very seriously: in June 2021, Upland offset a whole year of the carbon footprint of the EOS Public Blockchain on which Upland operates its NFT metaverse. On top of that, Upland uses “proof-of-stake” EOS blockchain that doesn’t require a lot of energy usage.

The company has 75 employees. The new funding will be used to grow the teams in the U.S. and Europe, and to invest in brand partnerships and user acquisition.

India Should Consider Lowering TDS Rate on Cryptocurrency Trade to Stem Flight of Capital, Users: Report
Twitter for Web Will Now Stay on the Last Timeline Tab You Visited, iOS and Android Update to Follow Soon
What is Intel playing at…?
Apple’s AR/VR Headset to Be Called Reality Pro, Could Launch Later This Year: Report
With This Wallet You Can Do Everything